Emanate will be introduced to the music industry, by building D-apps on our own Audio Exchange Protocol, in three main phases which align to our technology development, token economy maturation and legal environment: 1. Smart collaborations Emanate smart collaborations will enable artists to quickly exchange files, projects and simple contracts to protect themselves in their day-to-day collaboration workflow. In our commercial release smart-collaborations with be seamlessly integrated with various aspects of the Emanate platform and this forms the fundamental basis of the Audio Exchange Protocol. In earlier stages, the DApp will resemble a file sharing service with the added protection of a blockchain-back smart-collaboration. In stage one Emanate will also launch a basic streaming function in order to give artists a home for their music. 2. Collaborative music marketplace The second DAapp to be built by the team, is a music streaming and collaboration marketplace. This will open new revenue generation streams for artists and will contribute heavily to the token distribution phase of token economy. Artists will exchange their work in an open and decentralised market for tracks, stems, vocals, remixes and DJ mixes. 3. Full Audio Exchange Protocol A two-way audio access and monetisation protocol for artist-listener playback, 3rd party integrations and data writing and reading. The first full release of the Audio Exchange Protocol will see the technology become available for developers to integrate audio into their projects and could see many new DApps built into the ecosystem. 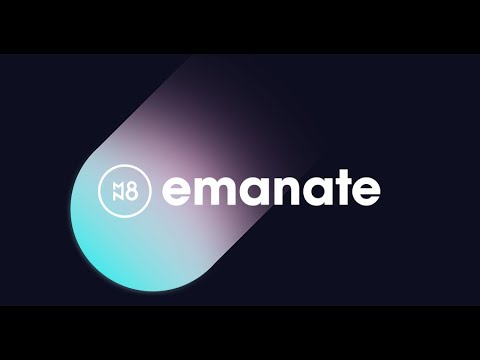 Emanate is an audio exchange protocol designed to enable producers, distributors and influencers in the music industry ecosystem to connect via blockchain based smart-contracts. The MN8 token is the cryptographic asset that will be sold in the early stages of the Emanate maturation journey. The tokens should be bought by those who wish to claim a position in the Emanate ecosystem because they believe in a decentralised future for the music industry.

If the Internet were designed today it would look more like a distributed blockchain network than a centralised server based system. Similarly in the music industry today, the road to monetising music can be highly centralised. Neither serves the contemporary 21st century music technology needs or the needs of the audiences.Many problems exist for artists, remixers, DJs and labels; the payment lag for creative works, the contractual complexities associated with collaborations, difficulty licensing small bits of audio and the current music industry financial processes. These, and the legacy structures that exist impede progress and  integration with today’s technological advancements.

With Emanate, artists, DJs and music influencers may find a way to share more output with each other and their fans, earning income proportionate to their contribution, whilst increasing their influence and notoriety. Emanate could help listeners and fans discover new music, connecting them to artists in previously unimaginable ways, enabling them to contribute directly to their favourite artist’s success.

We recognise the music ecosystem consists of more than just artists and listeners. Behind the success of many great tracks are samplers and audio pack makers; tastemakers and influencers; labels and promoters. We believe it’s critical that all contributors are rewarded fairly, whilst also providing incentives for audiences and supporters.

The project looks like abandoned and never ending ico or maybe it just illustrates their business approach. The whitepaper is hard to find. The vision is unclear and so is their tokenomics

Firstly, Emanate has a decent team at the wheel; strong and experienced in the right areas and beyond. The vision is also strong with a clear roadmap. The platform also looks good and is easy to use

Enabling artists to quickly exchange files, projects and simple contracts to protect themselves in their day-to-day collaboration workflow is a great concept . Their have been many apps attempted in music hope this project is successful!

Very needfull and amazing thing for all musicians all over the world. I believe that technologies has to make our life and job more fair and reliable. My heartful belief is this team could make this dream come true and music as is for it's creators gonna be also monetizable. We wanna live in much amazing world with best music!

- Tested prototype it is working fine and will be having many enhancements in coming days.

- Team is well organised and well experienced in technical/ functional.

- Team : There are several Key players, with past crypto experiences but also with experiences outside of the blockchain industry, which is a key point for such a project. Some team members are not linked to the project and they could use more devs to build such a product & protocol.

For these reasons, I am giving a 4/5 for the team.

- Vision : This is not the first project of its kind but monetizing music via the blockchain industry is nonetheless a great idea. Contrary to its competitors, I hope Emanate will deliver outstanding products and will be widely adopted, but only the future can tell.

- Product : The platform looks very tasty. A lot of features, powered by blockchain and completely user friendly. Moreover, they are respecting their roadmap so far which is not always something easy to do when it comes to blockchain devs and integrations.

This is definitely worth a 5/5 for the product.