Crowd Machine is creating the Crowd Computer, a decentralized app execution engine that is powered by a peer-to-peer network of Crowd Virtual Machines ("CVM") that run on peer devices by device owners who are paid for their excess capacity. The Crowd Virtual Machine is blockchain-agnostic and can be used to develop and execute smart contracts and decentralized apps on any blockchain. 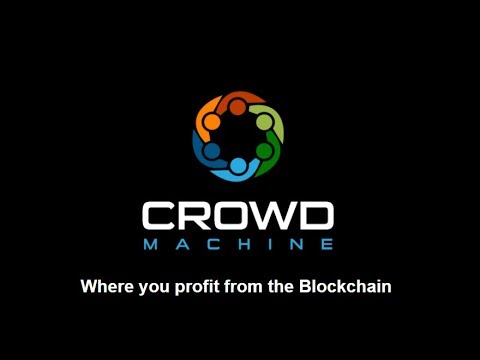 Crowd Machine is creating the Crowd Computer, a global decentralized app execution engine. It has been designed to execute blockchain smart contracts and decentralized apps that meet any requirement.

Embedded within the Crowd Computer is a comprehensive app development technology that allows anyone, from seasoned developers to novices with no coding experience, to develop blockchain and decentralized apps at rates that far exceed current approaches.

The technology employs a systems wide approach across the app lifecycle. It is fully self-contained and removes the need to understand, or pay for, any additional third-party technology required to get apps to market. It is also blockchain agnostic allowing apps to be created that leverage any blockchain including Bitcoin, Ethereum and Ripple. Furthermore, it provides a means by which sidechain apps can be created without being constrained by the functional limitations of existing blockchain networks.

Crowd Machine also allows its community to contribute source code to its Crowd Share repository. Each time source code is consumed and executed on the Crowd Computer the community member who contributed the code is compensated. Crowd Machine aims to usher in a new era of blockchain network adoption and decentralized apps. The combination of dramatically accelerating decentralized app creation and empowerment of a large population of code contributors, results in unparalleled speed of delivery of solutions to market.

We believe that Crowd Machine will accelerate the adoption of blockchain networks and the creation of decentralized apps leveraging those networks. It will play a key role in ushering in a new stable of market-ready apps that can disrupt the dominance of centralized infrastructure companies.

Crowd Machine has battle tested its technology with Fortune 500 companies such as General Electric, AON Hewitt, KONE and Anthem and is already generating revenue.

Hung Chih (Jason Hung)
Cofounder of International Consensus Association, Gamefi, Web 3.0, NFT advisor
Rated on Apr 28, 2018
3
3
3
3%
This rating's weight is reduced by 50% as there is no review added.

Ratings are that of opinion and not to be financial advice of any kind and in no way should be considered endorsement of any project. Please, do your own due diligence on anything you invest in!

Tyler Sanford
Marketing | Campaign and Community Management
Rated on Mar 1, 2018
3
4
4
3%
This rating's weight is reduced by 50% as there is no review added.

Need some more advisors on team

If described product indeed technically can be realised effectively, then I think it would be right for the funders first of all to get the support of the largest crypto experts. Without it is unlikely that the company will be able to get sufficient support.

C3. I am currently rating Crowd Machine 1 1 1.
However, I am also inviting the core team members/advisors to clarify by 15 Jan 2022 and I may revise my ratings accordingly after that.
Crowd Machine Team members & advisors: https://icobench.com/ico/crowd-machine/team
Cache: https://archive.fo/dH5KH

Crowd share is the next evolution of the blockchain

Crowd app studio is where one can build decentralized app without coding knowledge.
I am very curious about app studio tool to play with.

Vlad Skakun
Co-Founder and CFO at CryptoDiffer | Investor| Marketing Specialist| Senior Analyst at Venture Fund
Rated on Mar 26, 2018
5
3
3
2%
This rating's weight is reduced by 50% as there is no review added.

Interesting vision but still uncertain on how they will execute on this and whether this will materialize.

Tobias Schulz
Investment Manager, Pre-ICO Venture Capital Investor, ICO Advisor
Rated on Apr 27, 2018
2
3
4
2%
This rating's weight is reduced by 50% as there is no review added.

Really good team and Already working with good MNCs which give assurance to the project success. There is a lot of clarification needed in terms of Cloud Sharing of Data and Bandwidth.

Gökhan Koçak
Blockchain enthusiast. Innovator. Leader. International investor. Options and Futures trader.
Rated on Apr 24, 2018
4
5
4
1%
This rating's weight is reduced by 50% as there is no review added.

Eugene Podkovyroff
Investor, Decentralized Economics Researcher, Crypto Visionary, FinTech Pro, Startup Mentor and Advisor
Rated on Mar 27, 2018
4
4
3
1%
This rating's weight is reduced by 50% as there is no review added.

No doubt for the team capability for the product but need to be aware of many blockchain ecosystem competitors in different domain.

The team is lacking the right pieces to accomplish a good vision.

good team with ambition. the product idea should be made clearer

- Begin public CMCT token offer.
- The opening date for the offer will be midnight UTC April 1, 2018.

- End Crowd Computer public beta 1.
- Beta feedback will determine whether a second beta will be necessary.

- Release of the Crowd Virtual Machine to open source.