The Abyss is the first platform for online video games with unique revenue sharing system. Part of our income generated by the sale of games and services is distributed between gamers and developers in the form of rewards for various activities available on the platform. Gamers can play games, socialize and earn from an advanced referral program and gaming achievements scattered across numerous game projects. Developers will find a new channel for distribution on The Abyss, with a smooth integration and customer benefits, from marketing support to an additional income generated by the referral network. 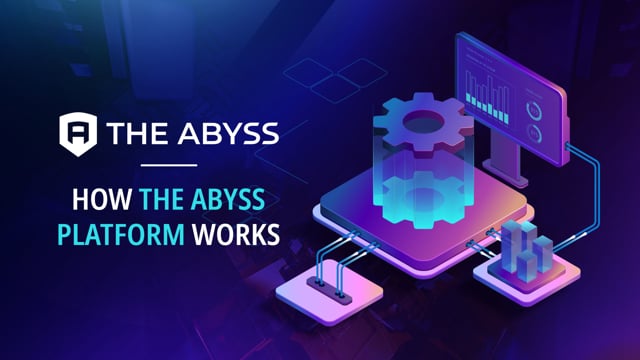 About The Abyss (DAICO)

The Abyss as a Next-Generation Platform

A gaming portal with a concentrated presence of MMO games in which a primary focus is placed on motivational programs for players as well as developers. ABYSS tokens are a priority internal mechanism for interaction on the platform (Protocol ERC20 on the Ethereum blockchain). Our gaming platform is to be offered for Desktop (Windows, MacOS, Linux), Mobile (iOS and Android) and Web.

Key Characteristics of the Project:

This system utilizes a principle of affiliate marketing: a maximal income is obtained by players and developers who are the first to bring in users to the platform. The system is oriented at more effectively inviting and retaining users than any other in the gaming sphere.

Good idea, but reward and referral model should be keep flexible and adapt to regulation at each country. Some of country not allow MLM, some disallow more than 3 level.

pros:
• DAICO Model - A more transparent and secure ICO model using smart contracts. Most notably, it allows for token holders to vote to return investment funds if development team fails to implement the project.
Red Flags
• Discrepancies in Project Team - The website fails to list two team members stated in the whitepaper (dated as Feb 2018). Either this indicates that the project team is unclear/disorganized or that core members of the project team have exited the project prior to the ICO.
• Lack of Qualifications - The company associated with the project, Destiny Games, currently hosts 6 games in their projects section. Some games are popular and have overall positive reviews, but language support is limited to Russian in most cases. The companies current portfolio would suggest that creating a distribution platform with international exposure is beyond the team's current capability.
• High Revenue Split - The Abyss proposes a 30-70 percent revenue split, with game developers keeping 70% of the sales revenue for games they choose to list on their platform. Other distribution platforms such as STEAM and GOG Galaxy take the same 30% cut, yet offer much more exposure and accessibility. Developers' may lack incentive to choose The Abyss over these larger distributors.
• Public Github has the Token sale contracts only. No evidence of Development.
• Fiat can be used on the platform rendering the token practically useless.
• Multi Level Refferals (5 Levels) for Users & Developers on their network. This is a practice close to MLM schemes.

Mofassair Hossain
CEO and Founder Perhalic, ICO and IEO Advisor, Investor, PR and Marketing Expert
Rated on Feb 15, 2018
4
4
4
3%
This rating's weight is reduced by 50% as there is no review added.

a fantastically experienced team with 10 years of experience in the development and publishing of MMO games.

Bobby (Borislav) Iliev
ICO Expert & Advisor | Business Development Consultant | Marketing Strategist
Rated on Mar 26, 2018
4
5
4
2%
This rating's weight is reduced by 50% as there is no review added.

Needs to build up credentials to execute on this and ensure it complies with legislation in each jurisdiction.

There was a time when I would have given a project like this at 4 for vision, but that was a year ago when the early entries in space were ICO-ing. Now The Abyss enters a crowded space and AFAIK none of the predecessors have succeeded in making a mark.

The problem is that the big gaming platforms and markets don't really have a vested interest in adopting someone else's technology to support intragame payments, trading, and rewards. There is a very long road to go before the big guys would open that door to a newcomer - more likely they will create their own coin/currency/platform before the adopt anyone else's.

So far The Abyss has a very glitzy website and a prototype which I've not tried because I really don't go downloading 3rd party software relating to crypto these days. It is hard to tell from videos what if anything is real yet.

A further threat to them is that Apple and Google are seemingly on a path to eliminate anything crypto related from their app-stores. They say this is to protect users - which is probably at least partially true. But really, they also don't want the competition for in-app and in-game payments which are huge revenue streams for them. So, good luck with that in the mobile world.

But this was and apparently still is a wide open field so someone to excel so I wish them all the best. Someone, somewhere has to crack this nut.

Strong and experienced team, solid business model and revenue potential and - Its the world's first DAICO. In addition - existing product with millions of users and solid partnerships in place.

Ricardas Bernotavicius
ICO expert. Investor. Founder at IUNGO.Network and few other companies in MedTech and IoT sector.
Rated on Mar 9, 2018
5
4
4
2%
This rating's weight is reduced by 50% as there is no review added.

Maja Voje
CMO at OriginTrail, First Purpose-built Protocol for Supply Chains Based on Blockchain (22.5 mm raised)
Rated on Apr 17, 2018
4
4
4
2%
This rating's weight is reduced by 50% as there is no review added.

Many decentralized Gaming & App platforms already in the market however the only way to reach widespread adoption is referral system .

First things first: thank you for a human readable WP, I did actually enjoy reading a solid black text over the white background. It was a breath of fresh air after lots and lots of crazy painted WPs.

Jokes aside, this is a great project built by an experienced team. They, as it seems, have a solid background in the field and they have a good understanding of the particular market niche.

I can't properly evaluate the game technology part, yet Destiny.Games is a very well known name and therefore I assume this aspect is well taken care of.

In regard of the ICO, token distribution and token economics I have all the standard concerns every pro ICO investor has, and some extra since the DAICO is involved: what is the early token value preservation and gain mechanics; how the liquidity will be guaranteed; how will the poll process be made time-adequate and fair; etc.

Yet that is great, that I have these questions, rather than very basic ones, which are usually addressed to ICOs these days! I do really wish you and you investors luck and best results possible. WP, projections and essential information disclosure can use some polishing, but the project is very strong all in all.

Love the vision here. E-gaming is booming into a massive industry, so i the vision here is great. Not sure this is the right team or project that can execute. Also, a lot of the roadmap developments listed to occur after the DAICO, should actually occur before the fact. A lot of hype on this project as it's the first DAICO (infamously mentioned by Vitalik as the ICO 2.0). i wish there were stronger gaming partnerships in play

- Has serious competitive advantage in compare with traditional, non-blockchain companies;

- Project has multi-level marketing referral system and 25% bonus sale during the first 24 hours;

- Its telegram group has over 28 thousand people, it was mentioned in various blockchain media outlets like Coindesk;

- It has large and experienced team with great track of performance;

- Good business model and transparent system which can compete with companies like Valve (STEAM);

Farabi Shayor
Technology Researcher | Research Experience Lead | Blockchain Specialist
Rated on Mar 11, 2018
3
4
4
1%
This rating's weight is reduced by 50% as there is no review added.

The idea of a state-of-the-art gaming portal creation

Testing the opportunity of blockchain technology integration into the new concept