A Revolution in Global Investment

SMART VALOR aims to build a decentralized marketplace for tokenized alternative investments backed by secure custody for crypto assets. Capitalizing on the Swiss legal framework, SMART VALOR aims to combine privacy and security of a leading banking center with the accessibility and diversity of the blockchain-based open network. SMART VALOR’s head office is located in Zug, Switzerland which is also known as the Crypto Valley. 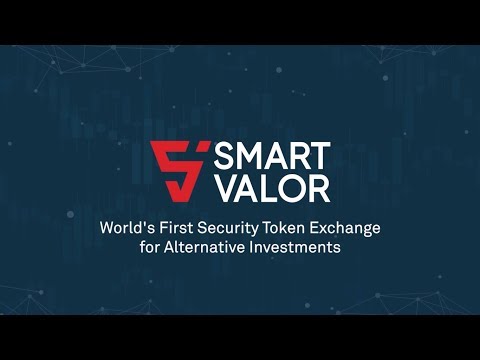 It became one of the five companies selected by Thomson Reuters for its Incubator Program in summer 2017. Forbes named SMART VALOR “Europe’s top 10 most exciting SME” in 2018.

The platform went live in October 2018 with an early access program allowing up to 5.000 participants to be the first to pass KYC and AML online and have access to assets and investment opportunities. The first assets to be tokenized on SMART VALOR will be venture capital funds, real estate, young tech companies and fiat currencies.

SMART VALOR is set to be the first fully regulated platform for security tokens operating out of Switzerland and Liechtenstein. All of the three major regulatory milestones has been achieved so far:

The latter, once granted, will give the company access to the 26 European countries for distribution of security tokens and deposit taking activity.

During the period 1-26 November 2018, SMART VALOR opens the 3rd and final private presale round of its own cryptocurrency: VALOR, which will be followed by a public ICO. In the previous rounds the company received 7 million VALOR token. It is supported by collection of acknowledged Swiss and international investors and advisors such as Stephane Pictet, John Henry Clippinger, Markus Rinderer and David Johnson as well as eight Venture Capital funds from US, Europe and Asia.

Ex-Advisory Board Member of Ethereum Foundation, CFO of Status.im

Head of Legal and Compliance