SPARC is creating the protocol for sending and reciving JSON and Javascript based computational packages on a distributed network using web technology. 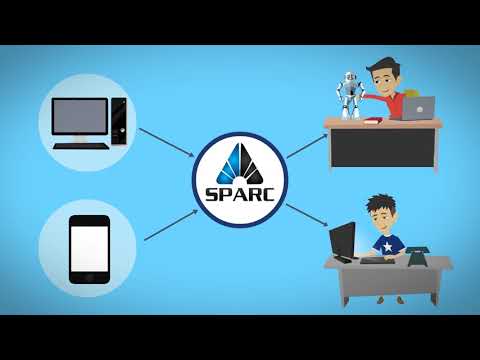 SPARC is the first North American globally-distributed IaaS providing consumers with the most costeffective, flexible, and easily accessible cloud-based high-performance computing. To achieve this, we are

1) Initially leveraging existing demand and infrastructure. The Berkeley Open Infrastructure for Network Computing (BOINC) is a computing platform comprised of 1,128,897 compute nodes. At 17.1 petaFLOPS, it is the third most powerful supercomputer on Earth and supports computing projects in astrophysics, mathematics, and biology, for example. The alpha version of our network connects to the BOINC network and rewards participant nodes with Science Power and Research Coins (SPARC) for computational work performed. Researchers and developers requiring computing power purchase SPARC tokens from an exchange and attach them to their projects. These tokens are distributed to the participant nodes in proportion to work performed. SPARC tokens can then be exchanged directly for computing power from the network or traded for conventional currency on an exchange.

2) Recapturing wasted computing power. We have identified inefficiencies in existing blockchain currencies. For example, in the competition-based process of hashing a digital transaction on the Bitcoin network, approximately 5,000 peta hashes per second are discarded. This amount of wasted compute power is equivalent to approximately 64,000x the combined power of the Top 500 Supercomputers. Instead of hashing to determine proof-of-work, SPARC is compensating participant nodes for actual work performed. We are effectively recapturing wasted computing resources and making them available to science and industry.

3) Varying hardware allocation instead of varying pricing. Whereas Amazon EC2, Google Cloud Compute and other services vary the price as a function of system loads, our network varies the hardware dedicated to your service via an auction process. We allow you to set your price point and let the network compete for available jobs. This ensures 100% network usage, and potentially high rates of power at low cost without added setup for your project.

4) Expanding infrastructure by connecting new compute assets to our global cloud. Our platform is designed to operate across all intelligent devices; smart phones, tablets, laptops and computers connected to the SPARC network generate revenue for their owners by performing computations  for user projects. Computer power consumers can also participate as suppliers earning SPARC tokens that can be used to fund their own usage, or be traded for conventional currency on an exchange. This is an example of demand creating supply.

5) SPARC foresees that imminently arriving self-driving automated vehicles, each containing Massively Parallel Processing (MPP) units, when not in operation, will network together forming one of the most powerful distributed supercomputers on Earth. The Internet of Things allows for any device to participate in our distributed computing network, earning SPARC for device owners and providing compute power for users.

6) Due to its globally-distributed architecture, SPARC incurs minimal costs relating to infrastructure, operations, and maintenance. This enables us to provide the most cost-effective and the most powerful computing services in the world.

Of the distributed computation networks I really like how this team has chosen a way to distribute tasks that is simple and utilizes what should be almost zero install computation nodes - web browsers. Using web assembly and integrated access to graphics card based computation power they should allow almost anyone to contribute computing resources to the Sparc distributed supercomputer.

While the Kingston University based team is full of relative inknowns with no background in blockchains I do think they have technical chops to design and build the computation part. I'm just unsure about the blockchain integration part. However since reward payments will be infrequent, not micropayments then they probably wont need anything too complex like payment channels at this point.

While roll out of the full platform is a way off they are already working with Boinc and rewarding BOINC collaborators with SPARC tokens.

Contrary to what ICOBench is saying the pre-sale is still in progress with a 100% bonus and ability to re-up in the second round with the same amount of bonus tokens.

I will admit to some bias here as I'm definitely a fan of using decentralized systems to do computations like this even if BOINC was doing it long before there was a simple way to reward people and encourage participation. A system designed by academics who are experts in number crunching seems to be the right way to do it instead of taking a business lead team. In addition I think the lack of native dependencies by utilizing the standardized web platform for computations is pure genius.

Update: 1/16/2017 after talking to their executive team I have determind