Fantasy sports stats and transactions, all running on the blockchain. MyDFS is an all-in-one blockchain-enabled Daily Fantasy Sports platform that runs on your mobile device. We’ve simplified the UX to make it enjoyable for players of every caliber. Platform uses MyDFS tokens that enable users to play, win, and exchange their tokens for other cryptocurrency or fiat money in a flash. 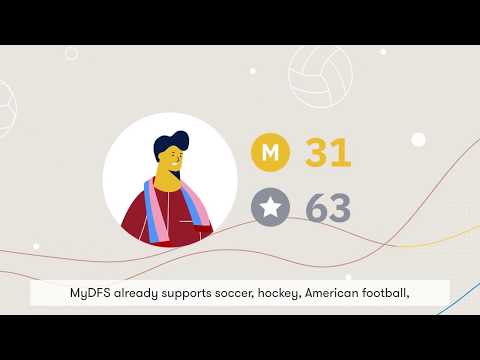 The online fantasy sports industry has experienced stable growth every year, topping more than $7 billion of annual revenue, generated by more than 59 million users in the US and Canada in 2017 alone. It’s not just user base that grows, but also their spend on fantasy league-related costs, single-player challenge games, and league-related materials. For example, the average fantasy player spent approximately $556 on his or her sport in 2017.

At the same time, fantasy faces a multitude of challenges that can only be overcome by changing the industry itself. There are uncertain legal statuses, high marketing budgets, complicated user verifications, money withdrawal problems, and complex interfaces, just to start. The market is mainly split between two main players who pioneered the industry, DraftKings and FanDuel. Investors were surely appreciative when they did it, but these companies now have serious problems that include badly balanced marketing budgets, little external competition, a number of monopoly scandals, and the inability to challenge the tough laws and regulations that control the business of fantasy sports.

MyDFS doesn’t try to compete with industry leaders, but redefines the industry itself. ­

Not first one in Sports, but the business idea is high potential. The management team

80% of project technology still build on top of centralized architecture. But it is a good start using blockchain technology at reward and investment.

The prototype is ready but hard to find the link to demo. Looking forward to see it works.

Tyler Sanford
Marketing | Campaign and Community Management
Rated on Mar 21, 2018
5
5
5
3%
This rating's weight is reduced by 50% as there is no review added.

A great team with huge experience in creating Internet products, confirmed by many deals with venture funds and subsequent sales to large corporations.

I like these apps, but the need for a block chain is doubtful.
Why do you need a blockchain?
I cant find MVP.
I dont know if the team is mature. I do not think there are any members familiar with at least the blockchain.

Thank you for sharing your opinion.
You can find MyDFS app download links here:
https://www.mydfs.net.
And our GitHub page:
https://github.com/mydfs/blockchain

Hope it will be helpful.

Purushotham Maralappa
Consulting Manager at Emurgo, Blockchain and Tokenization advisor
Rated on May 2, 2018
4
5
5
2%
This rating's weight is reduced by 50% as there is no review added.


This is not financial advice or a recommendation to invest in this or any other ICO. Investors must perform their own due diligence and not rely on external ratings to make their final investment decisions. ICOs are risky and 100% loss of capital is possible.

Vlad Skakun
Co-Founder and CFO at CryptoDiffer | Investor| Marketing Specialist| Senior Analyst at Venture Fund
Rated on Apr 29, 2018
3
2
3
2%
This rating's weight is reduced by 50% as there is no review added.

Cant understand why 42Mln USD? Looks like toooo much for it huh?

I like the vision for this ICO...it is certainly attacking an industry where the benefits of Digital Ledger Technology would be tremendous.

Personally, I want to see more diversity on the team

Good project idea, I'm not convinced on the team yet.

I like the product and the idea. This is a growing industry that has room for disruption.

Licensing is going to be difficult here. There are exclusive relationships some of these leagues have signed with other DFS groups and a new company from outside the US is going to have a hard time gaining traction with the US leagues. Internationally though, this could be huge.

A good idea but I note the weaknesses:
Hardcap is heavily overpriced. The development team is almost absent. There are not ratings from real rating agencies such as ICORating.
Good luck to the project!

Ratings MyDFSICO team member replied on 22 Aug 2018
Hello, Vladislav!
Please check our team section to know more about our developers team. We have 7 of them, and we truly believe that their vast expertise will help us to make our app the best DFS platform ever.
We reduced our hardcap to $20,000,00, thanks to experts shared their opinion about our economic model.
By the way, have you seen our application?
Please check mydfs.net to find MyDFS app download links.
Thank you very much for sharing your opinion!

It is a nice idea but not unique.

The financial model does not look very promising.

The CCO does not even have MYDFS on her Linkedin. That's weird.

Gökhan Koçak
Blockchain enthusiast. Innovator. Leader. International investor. Options and Futures trader.
Rated on Apr 24, 2018
4
4
4
1%
This rating's weight is reduced by 50% as there is no review added.

VISION: Strong vision, although niche. A good use case for the blockchain, making the gaming process more transparent and transactions more efficient. The success of the project will depend on how it is marketed to consumers. 4/5

TEAM: A fairly strong team, though some of the members, including the Chief Communications Officer and Chief Technical Officer, do not have MyDFS listed on LinkedIn. It is noted that the team is primarily based in Russia, thoguh has links to other countries too. 3/5

PRODUCT: The white paper is clear and structured well. The MVP is avaliable and ready for download. 4/5

This is not an invitation to invest. ICOs are risky and you may lose everything you put in.

Ratings MyDFSICO team member replied on 22 Aug 2018
Thank you very much for sharing your opinion. We highly appreciate it.

The project is not the newest one, but it could still work. The MVP is alright and the app is working, The team, though being international, seems ok, but the weird thing is that the CCO and the CTO don’t have MYDFS on their LinkedIn. I’d also recommend a better marketing plan

Bright idea in a good space.

We reduced our hardcap to $20,000,00, thanks to experts shared their opinion about our economic model.

Sanket Agrawal
ICO Advisor, ICO Management & Strategies, Blockchain Technology, DLT, Digital Transformation
Rated on May 5, 2018
4
5
5
1%
This rating's weight is reduced by 50% as there is no review added.

Great idea, of course. So much potential for blockchain gambling/sports/fantasy ideas... not quite “first to market” but still early.

Okay team. The project is not new. Typical fantasy draft and fantasy sport platform on blockchain.

However, the MVP is out and the app is functional, although they don't technically require their own token on its platform.

It will now all depend on how they market themselves and get the licensing done.

Farabi Shayor
Technology Researcher | Research Experience Lead | Blockchain Specialist
Rated on Mar 23, 2018
4
5
5
0%
This rating's weight is reduced by 50% as there is no review added.

We have discounts for token buyers offered during the crowdsale:

The app is fully playable and available in AppStore and Google Play.

Tokensale finishes.
Unsold tokens are burnt.
NBA is added to the application.

Swing Golf is launching an exciting Golf Entertainment Business that transforms the dri...