Aligned with its vision of providing innovative and state-of-the-art technological solutions to address existing issues crypto enthusiasts face, the funds raised in ERN ICO will be used for the development of Listern Audio Platform and Mindé Pocket Miner. These are the major projects of ERN. Listern is a revolutionary audio platform that supports songs, voice clips, podcasts, audio books, and more! With the help of blockchain technology, Listern Audio Platform disrupts the audio sharing industry by implementing a decentralized rewards system for creators, advertisers, and listeners. Listern Audio Platform facilitates an exchange of rewards via ERN token for every qualified transaction. Whether you are a creator, advertiser, sponsor, or listener, you can start earning ERN tokens through the Listern Audio Platform. Mindé Pocket Miner, on the other hand, is ERN's flagship product. Mindé Pocket Miner has the same convenience of a mobile phone, yet loaded with high-tech specifications that mining requires. Mindé Pocket Miner is conceptualized with crypto miners in mind. The pocket mining device has a built-in microSD card, touchscreen interface, camera, and a battery that can also be used as a powerbank. Aside from being a mini mining machine, Mindé Pocket Miner also serves as a cold storage or wallet for tokens and cryptocurrencies. This is made possible through ERNPay Wallet System. 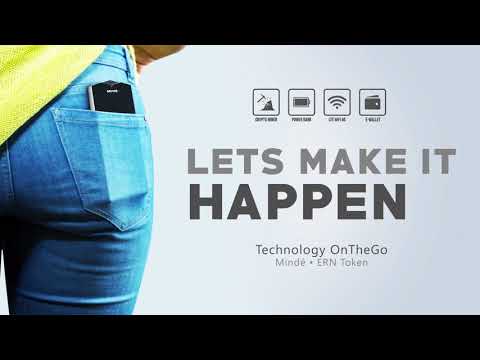 The ERN Project is slated to hold a private and crowd sale of ERN tokens. Aligned with its vision of providing innovative and state-of-the-art technological solutions to address existing issues crypto enthusiasts face, the funds raised will be used for the development of ERN Project’s Listern Audio Platform and Mindé Pocket Miner.

The current dilemma of mining cryptocurrencies are expensive hardware, rising electricity costs, and slow return of investment. According to analysts, crypto mining is set to consume more energy than households in the year 2018. How come cryptocurrencies, in their digital form and storage, demand such power and fuel, and now have worldwide real environmental costs?

How about mining apps for Android and iOS mobile phone users? Let's see. Running the entire Bitcoin network requires yearly electric consumption as much as a medium-sized country. That's a relatively huge amount of electricity. Imagine portions of it running on a mobile phone. Mining stretches phone capacity and since such mobile devices are not built for that purpose, it overwhelms battery and eats up memory space like no other. Thus, smart phones become dumb phones when it comes to mining cryptocurrencies.

That is why the ERN team came out with the idea of developing a mobile device that is built for that specific purpose—mining cryptocurrencies. Mindé Pocket Miner has the same convenience of a mobile phone, yet loaded with high-tech specifications that mining requires. Aside from being a small but powerful mining rig, the Mindé Pocket Miner boasts of features such as WiFi and Bluetooth connectivity, cold wallet storage, touchscreen interface, powerbank function, and a camera!

To create a better ERN Project ecosystem for all, the ERN team will develop its Listern Audio Platform, a blockchain based reward system sound sharing platform where listeners can earn by just simply listening to the sound contents uploaded by the users/composers/publishers to the Listern Platform. The transactions of the reward system will be validated by ERN Miners through ERN's mining device the Mindé Pocket Miner.

In partnership with team of developers converge to be the backbone of the Earn project.
Founders and its core team determine the feasibility and opportunities for the platform and its ecosystem

Recruitment of additional developers and key people.
Put ideas into a written WHITEPAPER and other technical and legal documentations.
Proof of work concept writings in whitepaper for LISTERN Platform and Minde Miner ecosystem.
Conceptualization and start prototype development of LISTERN Audio Sharing Platform’s blockchain based rewards system (ERC20) for listening audio file.
Negotiations and partnerships with early partners, clients, testers and investors for the ERN Project.

Continuous development and enhancements of ERN Platform for more services and satisfaction.