Spokkz will use Blockchain Technology to disrupt the $2 Trillion USD traditional Media Industry by creating a decentralized ecosystem and marketplace where film lovers will join advertisers, stars, content creators and merchants as stakeholders. 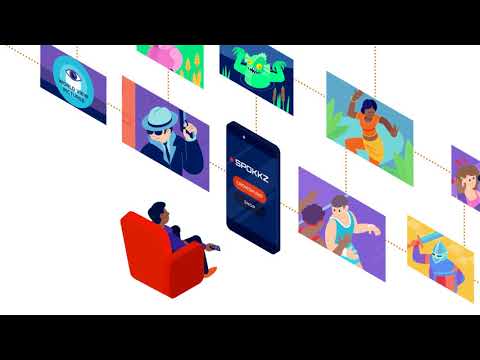 Fundamentally Spokkz will transform the media consumption business from being a purely transactional play to a community driven economy. Users will get rewarded Spokkz for reviewing, sharing or recommending content and will be able to use Spokkz to fund content projects of their choice.

How’s this going to work?

Spokkz is being issued by Spuul, a pioneering and established OTT player with over 60million users in 180 countries generating revenues of close to USD15mm. Spuul has decided to migrate some of its solutions to the blockchain and to tokenise it’s business with Spokkz. Spuul is recognised to be an innovative, full stack, pure play tech company that has built it’s enterprise in collaboration with premium providers like AWS ( for whom they are a case study).

A live platform, an experienced tech and business team, deep connections into the media industry and an influential advisory board puts Spokkz way ahead of the competition. Spokkz is dedicated to Mr Spock of the Starship Enterprise and hopes to represent all that he stood for – clarity of thought, cold/hard logic and the courage “ to boldly go where no one has gone before.

Spuul was launched in 2012 and since then has been one of the most innovative Video On Demand (VOD) platforms in the world. Spuul has over 60 million users and over 4 million paid subscribers as at the end of March 2018, and was the first platform to allow users and subscribers to download and watch content offline.

In December 2017, Spuul acquired Vision Asia, a premier Pay Television service provider in Australia and New Zealand. Following the acquisition, Spuul, combined both VOD and Pay TV and has introduced to market an innovative Hybrid TV product that brings together the best of Pay TV and VOD content called “Spuul+”. This new innovative hybrid product currently has over 180 linear channels and over 1,000 movies, which provides users and subscribers the ability to watch and/or record their favourite content on any digital device they wish.

I think this is a good project. They have a vision, some competititve analysis is presented at page 33 of the WP. The team has a proper industry expertise but lacks blockchain/ico/fundraising experience. Financial and business planning data is missing in the WP. There is a bunch of smart people in advisory board but I believe it should reinforced with one or two acting ico advisors that could really help to set up a good crowdfunding campaign.

Interesting project wanting fight with giant players on a huge market
This kind of platforms have a very hard way to get his goals, but is important they have a real product actually working. +60 millions users with fiat wallet is a promising number. If you get just 1% of users investing in the ICO and using the tokens on the platform, the ROI is guranteed.
The marketing campaign to the crowdfunding should be targeted to the actual users of the platform.
The team is good supported for a strong advisors group, but there is a lack of experience on blockchain and fundraising.

Strong team with a commercial background and a good use of blockchain in this area. Product needs to be strong and execution flawless in such a competitive market. By having participants become stakeholders, marketing spend can surely be reduce significantly, which will be there difference between just a tech product and a true mass market product.

Good thing I see from the project is it backed by an existing business. That can be a plus point for this ICO. However, this is highly competitive market with a lot of giant players and booming on internet TV. For example, people have a lot of choices/ options to watch TV on their smart TV with just internet connections.

Even the potential is huge but how to drive users to use your service is a question, no matter how many subscribers you have at the moment.

Please share more as I have not seen it clearly in your description and the whitepaper that you are tokenising this ecosystem with SPKZ and all users must use this token to purchase the service or they are using both FIAT as usual and SPKZ?

Jimbo CortesICO team member replied on 1 Aug 2018
Thank you for the great question.

All of our 60 million users already have a Fiat wallet as they use our movie service. These wallets allow them to receive or deposit money which they can use to watch and subscribe to the movies on the platform.

They are already used to using this wallet and it supports Paypal, Credit Card, Teleco wallets etc. After the ICO we will add SPOKKZ Tokens (and maybe other Tokens) as an additional payment type.

We know that not everyone will understand how to use Tokens initially but it is our goal and job is to gradually educate the user base so that the more the use our platform, the more they learn about how tokens can be used and the more they feel that buying token nows will be better because as the value goes up, they stand to benefit in the long run.

It is still very early days for average users to understand how to use tokens but we are committed to educating our customer base and make it simple and transparent for users.

This concept is groundbreaking in many ways. Trying to disrupt the traditional funding of media is a novel idea and something that is bound to be noticed.

Personally, I think these kind of projects are vital to the continuation of free speech and can liberate artists from studios and agencies.

There is a proper mvp with millions of users, there are decent partnerships in place, and the whitepaper is well thought-out and complete.

The team seems well-rounded and international. I hope this project gets the recognition and success it deserves.

Team: experienced business team in the same industry with traditional fundraising experience. You can see traditional fundraising deck traits that's not usually seen in other ICO whitepapers, such as competitor analysis and certain layouts. There seems to be an ICO advisor but the team seems to be lacking a token economy expert, as the white paper does not dive into this topic. I'd give 4.5 on the team aspect but rounding up to 5 giving the benefit of doubt.

Vision: the concept sounds great, to decentralize the entertainment industry and have everyone participate and earn tokens. However, beyond it's core content and region, it's yet to be seen how feasible the company can expand to other markets while also expanding outside of its core content.

Product: the existing Spuul product is nice, although still focused on its core content. The Spokkz token concept is awesome. What this token is missing is the token economics. How many tokens can users and other stakeholders mine/earn? How will you deal with stable vs. fluctuating token value and the exchange of different types of services and products, e.g., e-commerce? How will investors know that the token's value will appreciate? What mechanisms are designed to drive that?

Others: Nice and succinct white paper and video that gets the point across. Definitely a plus for a reverse-ICO with existing product and user traction. Looks like there was a change in the numbers from page 29. And some advisor bios cut off.

Head of UI/UX and Design, Spuul