Soar is a decentralised global super-map of the world built on blockchain technology. The super-map will include access to daily satellite imagery feeds, high-resolution aerial sensors and drone content collected by the greater community. All connected using blockchain technology to connect and share dynamic mapping data. Currently, over 80% of imagery captured by satellites, planes and drones is used only once. Soar will allow providers of under-utilised mapping content to monetise it at a global scale and unlock its true value. In accessing this vast repository of this content, Soar will create the world’s first global super-map by aggregating content from thousands of drone operators, aerial cameras and satellite images on the blockchain. In August 2018, a significant milestone was achieved by placing imagery from the European Space Agency’s Sentinel satellites onto the Soar platform. Through Soar’s innovative approach, users now have the ability to view and purchase near real-time mapping content at various resolutions, globally. By mid-2019, Soar plans to launch the world’s first mapping ‘app store’. The mapping app store will use AI and image processing technologies to enable additional end-user applications. Soar's partnership with industry leaders Alibaba Cloud goes further, by providing cloud-based image processing services. This means users can buy their desired imagery, have it processed to their specifications in the cloud, and then delivered to them directly; saving consumers both time and money. 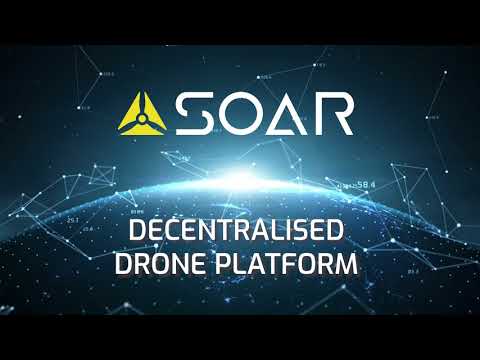 An experienced and solid team working in the drone industry for a few years.
They have already working MVP. You can try it on their website. They plan to release an already working product in the nearest future.
The idea of creating high-quality super maps is great!

The main idea is that while there are increasing number of drones being use. There lack a platform to share and utilize all these data in a trustless way which is what SOAR is aim at.

The first stage is to use Soar for mapping and aerial imaging just this alone have great potential. Drones can be use for many situation
Observing a large mining facilities which cannot be observe by mere human eye
Observing large plantations which could stretch Kilometers
Military use, which i shall not discussed here
Even to monitor disaster area although i do hope that SOAR can allocate some tokens out for free use by organization in case of disaster.

The token have real usage value and the project is also well backed and supported. You can find out more information from the website and white paper. Example look at page 42 of white paper.

Of cause the possibility of such drones data sharing can expand far beyond just mapping and imaging. Of cause currently most drones are only equipped with cameras and poor sound receivers so for now only imaging is possible. This of course depends on which sensors are being fixed onto the drones. For example mapping heat maps by attaching heat sensors is one possibilities. Sending drones to map humidity is also another possibility, of cause i am not weather expert so i might not know the potential use or limitations.

The potential and possibilities that Drones and perhaps other things such as IOT devices having been able to share their data seamlessly onto one trustless platform is near endless. I am not an engineering by training so i have a limited knowledge of what such a network can potentially do.

The basic model is that drone owners can “sell” their data capture by drones to buyers who would use the data, the transactions would be done in Soar Tokens.

I also love the concept of sky bounty. Where users get rewarded for uploading image of a bounty area. For example you are an owner of a big event and you can get drone to take pictures of your event for publicity, or maybe drones to take picture of your huge real estate etc. Of cause your identity would be kept anonymous?

The goal at the end would be to achieve a super map state. Where the entire world would be mapped into a constantly updated map of real time. Think of it like g map with much more precise and timely data.

Store large volume datasets on the blockchain such as video and images;
Natively handle spatial data types such as coordinates, polylines and polygons;
Efficiently perform geospatial queries;
Interact with industry standard geospatial databases and file formats;
Expose a map tiling service for use in web and mobile applications.

Test net is ready with a working product

About the distribution structure, while it might seem out of orinary that a dentralize system distributed only 4.3% to public, but I think the structure make some sense here.
Most public would be providing data rather than buying the data
The large majority of entities using the data or buying the data are likely large organization especially governments and militaries which are likely to come in at a large scale in private sales
About 37% are release to public and private investors.
About 48% to ecosystem, community and partnerships
Could not comment on 4. Since i lack info on the usage of ecosystem, community and partnership

The team is great and advisors include both BC experts and venture specialist. Although one team member have failed KYC, i still think the team is a great team. Please look into this team ICO and settle this ASAP :)

A little pity is only 4.3% avil to public sale, of such a great potential project.

How would sensitivity and private data be dealt? I referring to sensitive or private image being captured by the drones. Although there might not be laws regulating this now but in the future laws may come in. Such as using say sky bounty to tapped on drones to spy on a sensitivity area, for lesser complication let's assume drones are not banned from entering.


I can visualise how governments and militaries could potentially use the super map , but is there any possibly that smaller entities such as a plantation owner can also tapped into the advantages of such decentralize drone data bases? For example what advantage does a mining operator have if he or she users this vs using his own private drones data network? Or maybe how can a farm operator benefit from sharing his farm data drones with that of other farmers or other people? Of cause I do understand sharing data can earn you Soar tokens but I am looking beyond earning of tokens to see the potential of such a project. Which i think would be great if everything is done perfectly.


Anyway only 7% tokens is left, what a shame that i did not see this project earlier

Solid team, great vision and a massive market opportunity. I can easily imagine Soar being the default platform for all mapping and geospatial content in the near future. An absolute winner in my opinion!