Refine Medium is a decentralized media platform rendering authentic and high quality video content. It is built upon Ethereum technology designed to enable viewers, creators and innovators of the platform to connect via blockchain based smart contracts. A one-of-its-kind platform that will incentivize each and every stakeholder for their contribution to the platform. RefineMedium has come up with a social video platform which aims to bridge the gap between “human being” & “being human” as humanity thrives forever. There are 4 stages of building a quality creator in the RefineMedium ecosystem- Creators with a new idea and raw content, Creators collaborating with RefineMedium moderators to cause a positive impact on their creation with a touch of professionalism, Creators who have established their identity on the platform and intend to progress and prosper and at last, Creators who have achieved enough prosperity and stardom and intend to cause lasting changes in the society and inspire others to do the same. RefineMedium aims to provide an ecosystem which nurtures a naive creator into a self-actualized one. The goal is to reach the top of the “Refine Rhombus”. 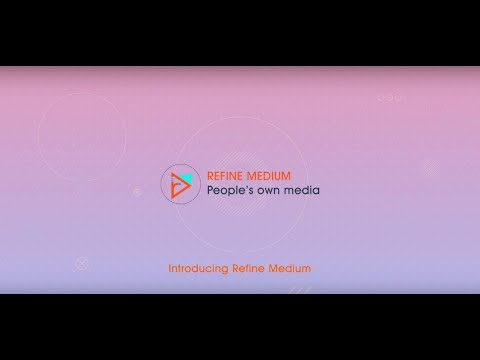 Video creation, conveyance & consumption trends around the world is experiencing a major disruption. The distinctions between print and digital media, video games and sports, wireless and fixed internet access, pay TV and Over-The-Top (OTT), social and traditional media are blurring. For consumers around the world, entertainment has become more of a necessity. It provides a gateway to happiness and gratification, during the momentary breathing spaces that people get in this rapidly progressing world. Unsurprisingly, the Entertainment and Media industry generates over $2 trillion in annual revenues worldwide. The USA ($750 billion), China ($190 billion) and Japan ($157 billion) are the world leaders in E&M markets.

Production houses and studios who once subjugated the E&M landscape are now eagerly looking over their shoulders at the adamant, aggressive and ambitious online streaming service providers such as Youtube, Netflix, Prime Video etc. This phenomenal growth of the online video content in the last decade has triggered a notable shift in the balance of power. While online and offline content providers are engaging in the tussle for control, consumers are the sole beneficiaries with unparalleled choice of contents. But is the shift of control from oligopolistic studios and production houses to like-minded video platforms a sustainable option? Or there exists a better option which raises the expectations of the content yearning consumers and simultaneously rewards them for watching and reviewing videos. And also, maintains a robust, transparent and egalitarian relationship between content provider and content creator. The response to this is definitely affirmative.

Entertainment & Media industry is sublty poised to experience the blockchain disruption and incorporate a pragmatic use of cryptocurrency. The existing greed driven business models of online video industry is set experience a major setback with the emergence of blockchain based video platforms which will place the control back in the hands of the users who feed the entertainment economy- viewers and creators. The glimmer and shimmer of the yesteryear’s entertainment industry can be ushered back with the radiance of today’s technology.

The team is really little and centralized. They need a more ICO and fundraising experts and advisors.

The core team have not passed the KYC process, big red flag, and the half of the crew have not added his role on Refine Medium in their social media profiles.

The vision is promising and I would love to see it working, but the fact is that Refine Medium haven't released a MVP yet and, at this time, all we have is a good whitepaper.

Giovanni Silvestri
Software engineer with passion for finance and the virtual currency industry
Rated on May 25, 2019
5
5
4
11%

Refine Medium is constantly working with assiduousness, perseverance and diligence to achieve the immediate mission, at the same time, working on a roadmap for a vigorous future through state-of-art technological breakthroughs and with a desire to be a mandarine in online video industry. Thus, providing an impetus to ultimate user experience and satisfaction through online video industry. “The RefineRhombus” sets us apart from other video platforms who are just focussed on pocketing user money.

Team
Working in the media industry form more than five years with technical figures to deliver the product planned.

Product
Product is still at MVP phase, however the team understands correctly the needs, view, development of a platform in the media industry.

Business Strategy
Good view of the necessities of the media industry and long-term business strategies planned.

Resilience
Good choice of advisors working from long time in the media industry.

This review is not a financial advice nor an invite to invest in this project: readers are always invited to make their own analysis before investing time/money in any virtual currency project. Cryptocurrencies are an high risk investment, always perform your due diligence.

- Team : Experienced and professional team, but only half the team is linked to the project on social media.

- Vision : This is definitely a great concept. There are other similar ideas but not exactly identical and more importantly none of them have successful released a platform. Having a blockchain based media platform is a long term dream and I hope this project will make it happen.

- Product : No MVP yet but the overview is great and the project and products well detailed in the various documents. The softcap is realistic and the MVP should be released soon.

Therefore, I give a 4/5 for the product.