More than half of the world’s population has no recognisable address and therefor are excluded from basic services, services that we take for granted. With the use of Blockchain, Smartphones and GPS, we are establishing an identifiable addressing and identification system for the people in order to make them part of the more structured society and economy. 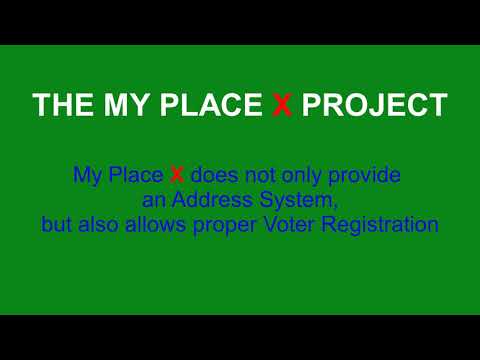 My Place X provides a system that ALL people can use to pin point their location and residence. The aim of this project is to replace the various forms of the current system with a system that is globally implemented, across nation’s border, in a global uniform address system, something that is long overdue.

The core implementation is blockchain technology, smart-phone technology, access to cellphone communication and the internet. There are various project currently under way to bring the internet and cellphone communication to remote areas in a cost effective and efficient way. With the introduction of digital crypto currencies, payment in a global currency has become trivial.

The basic principle is that users pinpoint the location of their residence in terms of GPS co-ordinates using smart-phone technology. Cellphone connectivity and access to smart-phones, has increased considerably in the past couple of year and will reach near global access in the near future, even in the more remote and poor areas. It is our experience, beyond expectation, that a large number of the poor people in South Africa posses at least one thing, and that is a cellphone.

We have found, from tests, that the average error on GPS co-ordinates is approximately 6 m minimum and can reach up to 20 m. In order to enhance the identification of the residence, the user can include a photo of his residence as well as of passport photo himself. If a street address is available, the better and this information can also be stored.

The system is even suitable for interpreneurs to create services for the users, in the form of crypto currency conversion, GPS co-ordinate pin pointing, issuing of ID cards with crypto keys, Drone Images for areas that have not been mapped, photos of dwellings and users, etc.

Charity organisations and NGO’s can promote the system and bring dignity, an identity and self worth to the people that have been excluded by the more civilised world. It would also provide access to facilities which have been denied to these people for so long. Charities can also distribute crypto currencies for using the system, in exchange for community work and other tasks.

For online shopping companies a new market is opened and together with courier companies and local distribution and postal services, more than half of the worlds population, can be included in the current global economy and uplift the living standards of these people. On the flip-side, products from these people can be collected and distributed to other sectors of the economy.