MusicLife is the world's first music exchange. The original model of "earning revenue by listening to music" enables users to automatically purchase music shares by paying for music and to earn an equivalent dividend from the song. MusicLife owns 600 thousand registered users, while its accessed music playback software covers 30 million registered users. With the $5 million funding round and support from numerous celebrities, MusicLife was praised by media as one of the most potential projects of next-generation blockchain applications. 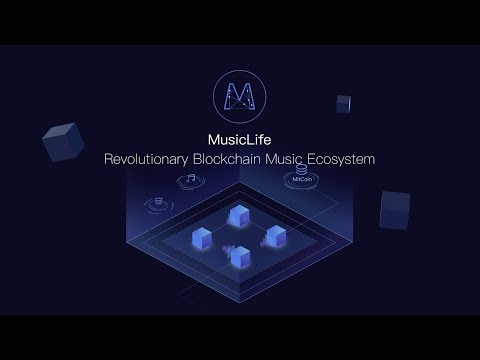 MusicLife is a blockchain music exchange ecosystem that allows fans own “stocks” of songs and purchase music. Every shareholder can earn dividends directly from their song shares. MusicLife is also pioneering a model that lets users mine cryptocurrency by listening to songs on musical wearables. Since launching this June, over 600,000 people have signed up on the MusicLife exchange, which has over 30 million users in its ecosystem.

On MusicLife, music holders (artists or record companies) can license their copyrighted music to the platform where it will be free to listen to until it hits 50,000 plays. Once a song reaches this threshold, an AI-powered mechanism will set a price for it based off frequency of plays and create a MusicToken. MusicTokens represent the property rights of songs and are split into multiple shares. Music holders will own 95 percent of shares and MusicLife will own five percent of shares. Fans will have the opportunity to purchase up to 45 percent of existing shares from music holders.

While paying for music, fans can get song shares in the equivalent amount of the song’s listening price, which will remain at a low rate of around one dollar. In addition to paying to listen to songs, users can purchase and exchange shares of songs with MitCoin (MITC) on the music exchange directly. As songs increase in popularity, MusicToken shareholders earn MITC dividends.\MusicLife also allows other softwares to embed their music libraries for free via an SDK. Software linked to MusicLife will share in the profits generated by users purchasing music. The first software embedded is the app echo Music which provides innovative music services and has 30 million users worldwide.

MusicLife has also developed a model which lets users mine cryptocurrency by simply listening to song on connected musical hardware. Musical wearables can connect to MusicLife through an SDK which allows the hardware to collect listening data and establishes MusicLife’s song prices. In exchange for their listening data, users who opt in will earn MITC directly, effectively mining cryptocurrency by listening to music. The audio glasses, MusicLens™ will be the first piece of hardware to connect to MusicLife’s ecosystem.

MusicLens™ are trendy glasses that use bone-conduction technology to play music without headphones. MusicLens™ glasses also have sensors which can verify that a human is listening to a song, allowing MusicLife to accurately set song prices in their ecosystem. MusicLens™ will be in mass production in late 2018.

Awesome project. I think its gonna be the next spotify. One important thing about what makes this project stands out is the fact that it already has thousands of users. Am excited to see their project develop.

The project has experienced and solid team from China. It is worth to mention that they have partnerships already with working companies in this niche (Echo).

According to their roadmap, MusicLens "mine machine" goes into production and can be purchased in September.

They have a huge community in Telegram and support from people all over the world.

The hardcap seems reasonable for such product.

I like the idea of the project in general. This product is a great opportunity to mass adoption of blockchain in casual people life.

I like this project and the team behind it. The team's profile proves that they can deliver this product excellently. This is true because core team members have music tech background which is a crucial ingredient for this project.

Secondly, the MusicLife got listed on biss.com, for any project listed here has true technological and economic value as the team behind biss.com take care to select an only viable project.

My rating is also based on the whitepaper. Everything about this project is innovative from the tech to the economic model. Personally, I'm going to invest in this project and I believe that the team will deliver.

I only hope that sooner than later, the team will activate its global community once more so as to kick-off engagement in all quarters.

I have to say i love this idea, this would greatly reduce priacy and make music affordable to everyone. Not only that both the consumers and the artist get to earn from the artist work and popularity.

Great usage of Blockchain. This one goes beyond many music blockchain applications out there which tend to solely focus on copyrights and trademarks. This one brings music and resulted earnings to all involve.

team wise i would say there is one music professional and one blockchain professional, could have needed more in my opinion. The reason i give 2 is there is no Linkedin profiles and failure of KYC. Also there seem to be no advisors

Successfully negotiate with the first batch of hardware and software partners. Complete the first edition of white paper. Start technology research and development .

Improved economic model. Decision as to the design of the public blockchain.

Start ICO. MusicLens "mine machine" goes into production and can be purchased.