**MoCo IEO starts at p2pb2b.io on 09/16 ~ 09/30. Don't miss this last chance to participate!** The MoCo Platform will create the next age of anonymous social networking services, in 3D and 4K+ VR, while providing a means for its users to monetize their creativity and talents. It will also bring seamless, real time lossless 3D, 360 virtual reality communication, and Live events in 4K+ to the world. 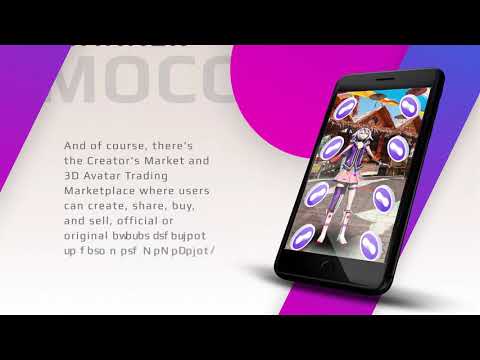 VR Motion Communications (MoCo) itself is a revolutionary communication platform thatwill make the following next generation media communication content and services,possible; the world’s first anonymous 3D Avatar Chat, 4K/8K Live and Streaming Chat andother streaming services, and finallyImmersive 3DVR LiveVideo Chat.
In the firststage of our platform development,we will present the world’s firstmobile,anonymous3D AvatarChat, Creator’s Market, Marketplace and game platform. TheMoCo Platform’s online Marketplace will include both an Official Store where users canpurchase officialavatars and avatar-relatedcontent, and a Free Marketplace whereusers can monetize their own original avatar-relatedcontent.

In the next stage, the MoCo Platform andtechnology will enable the introduction of awhole new VTuber universe-but in 3D-where users canfurther monetizetheir creativityand talents.Development to this stage also will make it possible tobroadcast large scale,simultaneous, 4K/8K, 360°RealTime,VR streaming events around the world, such as WorldCup Soccer games, the Super Bowl, andeven sold-outconcerts by top level musicians onthe other side of theworld.

In the final step of our platform development, we will combine our A.I. Video Compression,A.I. Automatic 2D-3D conversion, and A.I. motion capture technologies, to make it possiblefor users to enter the VR space using only their web cameras or mobile devices.

Users willalso be able to create their own customized Avatars or Character bots and move aroundin,create,andexperience,user-made virtual RooMs, and communicate with their family orhang out with their friends.Users will be able to create and monetize their ownoriginal content, which we willcopyright-protected using the Blockchain and smart contracts,supported by the MoCocryptotoken.Supported by blockchaintechnology, the MoCo Platform and the MoCoToken will allow the development and buying and selling of original content in a fast, safe,and secure ecosystem. Individuals and businesses will be able to meet and communicatewith others all over the world safely, and they will also be able to create their ownpersonal monetized economies utilizing their own talents and ideas, and engage in securecommerce with each other as well.

This document presents the dream, the technology and the economic facets of theRevolutionary MoCo Platform.

Finally it’s coming - we as humanity on the way to be digitized and becomes avatars in new virtual world. I’m personally a bit scared and at the same time anxious and excited to see and use it in real. Very good vision and understanding upcoming trend. Best luck to the team - can’t when it happens!

Social networking platforms always have great opportunities of expansion due to user base,MOCO team seems dedicated towards their goal to achieve what they are claiming.

Business model is good and attractive i am sure MOCO team will work hard to get best out of what they explained in whitepaper.

Seems good project to me, will be following it for sure.

Good project with multiple stages of development in short time span, really good to see how they planned it for implementation.

Moco will make it possible to broadcast large scale,simultaneous, 4K/8K, 360°RealTime,VR streaming events around the world, such as WorldCup Soccer games, the Super Bowl, andeven sold-outconcerts by top level musicians onthe other side of the world.

Birth of the idea for the MoCo Platform.