The LUVEN screening test method created by scientist of our company detects cancer at its early stages with the accuracy of up to 96% only comparable to biopsy. None of the existing diagnostic techniques has such a high diagnostic accuracy. The LUVEN technology allows diagnosing the disease at its early stages , thus, giving a chance to thousands of people to prevent its further development. 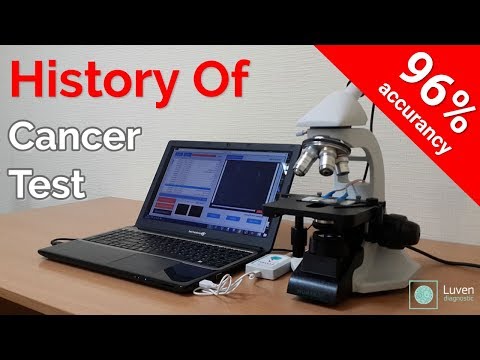 The LUVEN screening test method created by scientist of our company detects cancer at its early stages with the accuracy of up to 96% only comparable to biopsy. None of the existing diagnostic techniques has such a high diagnostic accuracy.

The LUVEN technology allows to diagnose the disease at its early stages, thus, giving a chance to thousands of people to prevent its further development.

For more than 20 years the Ukrainian scientists have been developing a diagnostic method based on cyto-morphological and cyto-biophysical properties of the buccal epithelial cells. In 2004 at Fenix Cancer Research Center, they continued their research and, finally, came up and implemented an experimental method. A new method of biomaterial analysis allowed to establish a cancer diagnosis at its early stages and to assess predisposition to cancer. A great success in this medical field opened a door to new possibilities,including cancer prevention and therapy. The longstanding scientific research in this field culminated in development of The Luven diagnostic system.

Why is it critical to detect cancer in its early stage?
Around 10 mln people worldwide are annually diagnosed with cancer, with every third patient dying from it. One of the main reasons of such a high mortality rate is late diagnosis.

This is why one should get a check-up as often as possible, thus preventing the disease progression.

Regardless of the rapid development of modern medicine and biology cancer, annually, takes millions of human lives. One cancer patient, worldwide, dies from this disease every 30 seconds.

The key to successful cancer treatment is early diagnosis.

The development of this method started in early 1983 at the research institute, chair for genetics. Based on the cellular theory by Rudolf Vichow, a team of scientists was working on a diagnostic method and studying buccal cells. Ms. Galina Shchukina, a genetic scientist and cytologist, was at the head of the scientific research. She conducted an in-depth study of scientific papers describing a new biophysical concept of the gene activity regulation based on the role of relationship between homologous chromosomes and genome. Together with Mr. Alexander Shchukin, a nuclear physicist, they invented an ion trap allowing to estimate bioelectric charge of cells. Further research and studies of this concept laid the basis for a new diagnostic method born in 2004, according to which any changes in the human body reflect on cells, including buccal epithelial cells. It was the first milestone in the development of LUVEN a unique diagnostic and treatment system. As of today, this method allowed to collect statistical data on tests of more than twenty thousand of patients.

Why is it lucrative?

Cancer research is an acute social problem, in view of this they cast a veil on profits of medical companies. However, in-vitro diagnostics, and particularly cancer diagnostics, is a huge and most rapidly developing sector, with the potential global market of DNA cancer tests worth about $20 bn.

Unlike the majority of projects involving ICO, our company has already completed 90% of the whole thing. The presale period starts on November 15 until December 6, 2017. The token sale is planned from January 15 to February 28, 2018.

Development ofthe cancer diagnostic method started, based on the study of buccal cells (cells from the inside ofthe cheek)

In five months after launching a franchise, the contracts were signed with more than twenty outlets, half of which have already run tests on more than two thousand patients. Suspension of activities for a time allowing technology enhancement.

Preparing and starting a preICO aimed at fundraising for the software enhancement, legal costs and operational expenses ofthe project

Opening 20 new labs in the European Union and Eurasian Union, incorporating a blockchain and developing a domestic exchange for token sale, working on the optical recognition of incoming images ofthe cell, creating a database of patients and their test results for monitoring tendencies and informing patients on the necessity of being diagnosed

Starting clinicaltrials and certification in the USA and Asia

Developing home gadgets (a home lab) for running tests on the entire family at any time, launching the product.

BAMBOO aims to provide mankind with free* and borderless insurance through blockchain, ...