Having completed all our milestone developments, we are now running the second round of our sale. First sale concluded in July 2018 and the second will begin Jan 2020. For a full list of all our updates, developments and dapps see our website. Kleros uses blockchain and crowdsourced specialists to adjudicate disputes in a fast, secure and affordable way. Kleros connects users who need to solve disputes with jurors who have the right skills to solve them. Crowdsourcing taps into a global pool of jurors. Blockchain technology guarantees evidence integrity, transparency in jury selection and incentives for honest rulings. 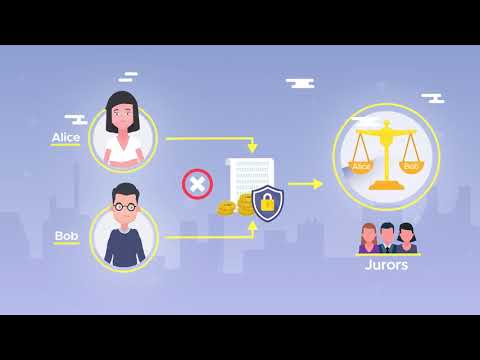 3 to 5% of the 38.5 billion e-commerce transactions per year end in a dispute. This means that roughly 155 million disputes need to be reviewed every year. That number is not only growing but likely to spill over into the newly burgeoning blockchain economy.

Recently, regulators have encouraged the use of alternative and online dispute resolution in commercial and consumer disputes. However, existing resolution methods are slow, expensive or complex for most disputes, which usually involve just a few hundred euros between agents in different jurisdictions.

Kleros is an online dispute resolution platform that leverages blockchain and crowdsourcing to provide an efficient resolution system for a number of frequent consumer disputes in areas such as e-commerce, collaborative economy and others.

Disputes sent to Kleros are resolved by a panel of randomly selected jurors. Blockchain guarantees that no party can tamper with the evidence nor manipulate jury selection and that rulings are automatically enforced by smart contracts.

The use of crypto-economic incentives results in a radically more efficient dispute resolution method which can greatly enhance access to justice in the context of the digital age.

Kleros’ potential also includes content curation for applications such as fake news detection and fighting hate speech online, as well as oracle applications with the potential to secure a large number of contracts in insurance and finance.

Kleros has produced three live Dapps with real users on a limited budget. Kleros is regarded as a well-known and respected Ethereum project, having demonstrated the highest degree of effective management and development in delivering their roadmap promises.

Kleros can greatly contribute to justice inclusion in consumer disputes and enable a safer and more equal commerce environment throughout the EU.

Just as Bitcoin is bringing banking for the unbanked, the Kleros promise is to bring justice inclusion for the “unjusticed”.

Localized team and advisors.
Utopian idea, in my opinion this will not work. The idea was tried to implement other projects. There is no information about soft cap and hard cap. Few information is filled in on the icobench, they did not approach this seriously. There is no KYC verification for team members. There is no profit for investors, a clear business plan and ROI

Stuart JamesICO team member replied on 11 Jun 2018
Vladimir. I'm not sure where you got your information but it seems you haven't researched the project at all. There is no soft or hard cap as we are using an Interactive Coin Offering as proposed by Vitalik himself. This negates the use for either Soft or Hard cap as each contributor can set their own.

What does localized team and advisors even mean? We are situated around the globe. What extra information do you need to see? Our team are all verifiable on LinkedIn as well as pitchin at Consensus2018, Token 2049, ETHCC, Devcon and incubated by Thomson Reuters a huge name.

I suggest you do some better research in future before reviewing further projects. It's clear you haven't taken any time to do this at all.
Best regards,
Stuart

20% decreasing to 0% at the end of the two month duration.

MVP of Kleros released on the test net

Start of the first pilot

Full version with real use cases

Release of version with miltiple subcourts