More Power For The Blockchain Industry

Karvuon Token will produce and supply the Blockchain industry with the energy it needs to fulfill the ever-growing appetite for energy consumption while bringing energy to other industries. Karvuon currently owns 327 million tons of JORC-approved coal deposits in Mongolia, and plans to start with this traditional energy source in order to build and operate renewable energy plants. Karvuon is a blockchain-based platform built to construct a wide variety of energy-producing plants in Mongolia. Because of its natural resources, land, and over 300 sunny days, this country is the perfect fit for mining farms where renewable energy sources will be utilized. Our goal is to become a world leader in the production of energy through the construction of wind farms, solar power farms, power plants, and a blockchain data center. By generating enough energy, we plan to support an industrial park to host data processing centers as well as cryptocurrency farms to create a highly profitable company for our shareholders/token holders. Karvuon will hold an IEO to collect funds for platform development. The allocation of Karvuon utility tokens will represent tokenized energy produced by Karvuon coal-powered plants or solar/wind farms. Users will have the chance to exchange them for security tokens supported by platform-produced incomes. The STO campaign will be launched on our platform to provide holders of security tokens with the opportunity to receive dividends distributed each reporting period after official financial statements. Our team aims to make noticeable changes and improvements in the mining sector, providing low computing costs and better power alternatives. 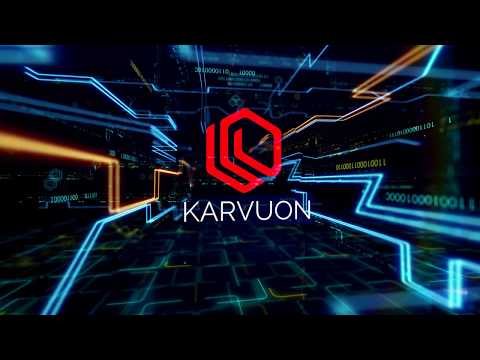 Today’s energy sector is significantly changing its landscape due to technological progress and innovations. Current energy systems are undergoing significant changes and shifting their business logic affecting various aspects of our lives.

Rapid growth, speed, and continuation of technological advancements change the mechanisms of functionality and maintenance while involving such technologies as blockchain, artificial intelligence and machine learning, progressive mining facilities, etc. With the primary shift concerning renewables such as solar and wind generation, the expected increase by a factor of 60 and 13, respectively, from 2015 to 20501 is opening a great landscape of opportunities within energy and utilities.

In line with the current industry state, Karvuon aims to produce as much energy as needed to fulfill the ever-growing appetite for its consumption and bring energy primarily to the Blockchain industry and additionally other industries. With the rapid growth of blockchain, the technology itself is advancing at an alarming rate. Even with all the advancement and adaptation, the industry requires fuel to run on - energy. Because the energy sector is already under heavy load caused by other industries, the blockchain industry needs a new energy source that is cheap, feasible, and sustainable which results in the need for a resistant energy source. Respectively, Karvuon positions Mongolia as a land-rich country capable of producing enough energy from its resources.

Mongolia! This is the first project I see in blockchain space working for this great country and for energy industry! Renewable energy for whole the planet is one of the core challenges ongoing nowadays. Team very clear see that more power for blockchain industry as well as mining is extremely growing process and they see the right direction of development. My respect to team and wish best luck to the project!

Implementation of blockchain into energy sector is good thought also the geographical area plays important role thus implementation in Mongolia Seems a plus to me.

Team is good with expertise in defined sector, WP is well drafted and good roadmap shows efforts of team for their goal.