Control Your Smartphone By Your Mind

HighSeek is a neuro-headset-controller. Our main aim is to simplify the use of smartphone applications & do it without hands, with the help of mind. The headset - the BCI (Brain-Computer-Interface) neurointerface is based on the EEG principles. It is a rim with 6 sensors for recording electrical impulses. Now you could play the games on your smartphone or use favorite apps by you mind. Now the neurointerfaces are getting closer to us. Already today we can get the Internet of things around each of us. 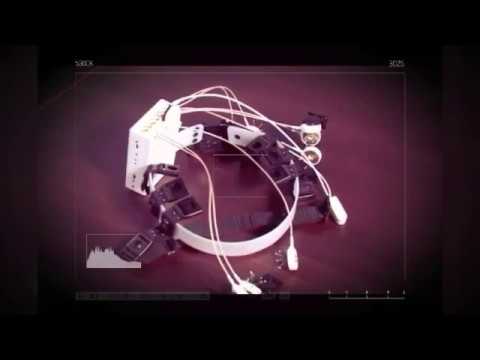 HighSeek is a neuro-headset-controller. Our main task is to simplify the use of smartphone applications and do it without hands, with the help of mind. The neuro-headset on dry electrodes, allowing to register pulses without a conductive gel.

The neural interface allowed us to identify the key points for obtaining high- quality signals for certain mental teams, so that their registration was as clear and explicit as possible. Just to get four commands. Two of which are the result of the mental command. and the rest are two extreme states - meditative mental relaxation and concentration.

The headset - the BCI (Brain-Computer-Interface) neurointerface is based on the EEG principles, and is a rim, on which there are 6 sensors for recording electrical impulses (5 electrodes and one neutral). One is located on the frontal lobe, four - in pairs above the ears, and one is attached with a clips for the lobe of the ear.

Manager of startup projects of the Business incubator of the IT park, co-founder of the project Regicon.ru Competencies: ideas packaging, viral marketing

Vice-President of the Foundation for Support and Development of Children's Creativity "The Planet of Talents". A consultant on the SMD approach and the design of activity systems

Development of a prototype of the neuroheadset on dry electrodes.
    

Research work on the prototype.
    

Marketing analysis of the market. September.
    

Collection of information and data for the HighSeek project.
    

Entering the markets of Europe.
    

Entering the markets of Asia.