Gems is a protocol for contracting workers to perform micro tasks. Workers stake tokens in order to prove validity of their tasks and earn a reusable computed trust score, enhancing the cost-efficiency of the network while democratizing access to scalable micro task workers. 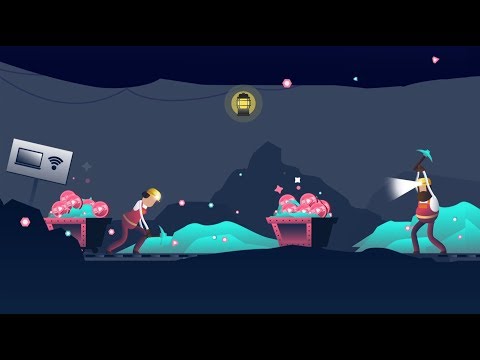 Gems, a decentralized, open-sourced, human task crowdsourcing protocol built on top of the Ethereum blockchain. Using the Gems Protocol, anyone can tap into the power of scalable micro task workers without needing to worry about task verification, trust, or payments. Gems is designed to disincentivize malicious actors and reward fair players. The Gems Protocol is comprised of a staking mechanism to ensure task completion, a trust mechanism to track worker integrity, and a payment system to reduce transaction fees. The GEM token, a multi-utility token, fuels the Gems Protocol.
Gems uses its token mechanism to enforce the behavior of all participants, instead of being regulated by a single operator. We further introduce the first application using the Gems Protocol, aptly named the Gems Platform. The Gems Platform connects those who want work done (henceforth known as “requesters”) and human workers (henceforth known as “miners”). By using the Gems Protocol, the Gems Platform removes socioeconomic barriers that exist in centralized alternatives (e.g. large fees, market inefficiencies, need for bank accountants, etc.). Anyone can build on top of the Gems Platform, creating “modules” that are interfaces for particular human tasks. The first module the Gems team will build focuses on labeling data for AI.

The project has an “all-star team” and the reviewer is sure that they will be able to deliver a fully working solution in a few months. The team are developing rapidly and community members are currently participating in pre-alpha testing.

The whitepaper mentions that their competitors Amazon Mechanical Turk and Crowdflower are at a disadvantage as they charge high fees, have a bad UI and don’t cater for the unbanked. Those disadvantages are not impossible for the existing players to overcome. Stanford’s Crowd Research Collective is currently designing a “self-governed crowdsourcing marketplace” dubbed Daemo at present, and this could be implemented as a competing platform. Another competitor that is not mentioned is AI and Machine Learning. If there is a system that provides financial incentive to workers and verifiers for menial tasks, a clever individual could hack the system and use bots on certain GEMS projects. This system has a verification system built into it, but it is a human-designed system (which is prone to errors), and some tasks are very menial. Machine Learning is advancing at a rapid pace, and is already able to do some of the tasks that this mechanical turk platform expects humans to perform, e.g. completing surveys, transcribing documents, captioning photos, sorting documents, flagging copyright or inappropriate content.

Since there's no business plan, the reviewer did a search to see if there is a market for these types of menial tasks. Various sources indicate that there are at least 500 000 MTurk workers using Amazon’s platform. Most earn less than $5 per hour and are geographically concentrated in US colleges, India, and various Asian countries. These are workers who have access to the internet for hours at a time. The use cases that the project team are looking to tackle sound viable and worth pursuing. See this article on the types of initiatives that the team are considering sponsoring for their beta-testing phase.

GEMS can be summarised as a gig-economy job board, where an employer can recruit multiple workers to perform menial tasks; verifiers ensure that the work is of high quality; escrow and a staking and review system is built-in to ensure both employers and workers are protected. Due to the decentralised nature and use of an off-chain GEMS payment system (unknown where this physically resides as the technical architecture is unclear) that only persists groups of transactions to the Ethereum blockchain, considerable cost efficiencies are realised.

It’s a platform that connects workers (who can perform menial tasks) to employers (who want to pay minimum wage in the form of GEMS tokens). Once the solution goes-live and the value of a GEMS token is determined (based on lower fees, and pegged in fiat terms relative to what employers’ pay on competitors platforms), there should not be much room for the GEMS token to fluctuate in value. Perhaps GEMS token price inflation in line with minimum wage increases on a global scale?

On the Telegram channel, there are members who explicitly state that this is not a crypto coin for investment. The GEMS project has a high number of Telegram users because people are currently interested in being on the ICO pre-sale whitelist or want to partake in the alpha-test bounty program for tokens. The GEMS project is great because it benefits the community of MTurk workers and reduces costs to the employers.

However, the reviewer only sees this project as being a good social cause.

8
Upon Completion of Token Sale

9
Upon Completion of Token Sale