AR brings new and fresh experience, and dramatically changes the way we play mobile games. An ordinary walk in the park turns into a fierce struggle for survival and resources. Clash & GO offers a sophisticated yet easy-to-access fusion of genres, eliminating their down sides while blending familiar mechanics with top-notch technology.Dive into an infinite world of endless possibilities and rich AR gameplay. The fusion of Blockchain and AR enables players to transform and manipulate their virtual surroundings. Whenever you open Clash & Go, you don't know what surprises the dynamic, ever-changing world will bring. 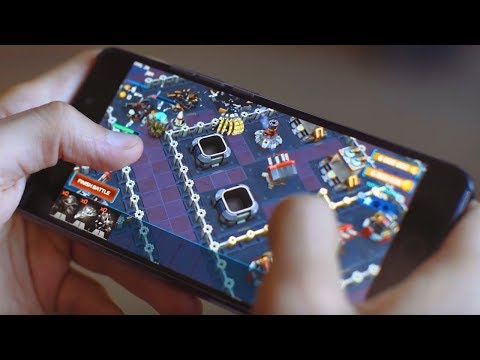 Clash & GO is a mobile game that uses blockchain technology and combines several genres: a geolocation game in augmented reality (AR), and a city-building strategy game with real-time battles. By means of the CGO token created by our company, players will be able to manipulate the fusion of the virtual and the real world.

Clash & Go goes far beyond what is normally found in mobile games. Unlike other city-builders and tower defense games, it is not constrained by the boundaries of the screen of the user’s smartphone. Clash & GO gameplay offers two gameplay modes: Strategic and AR (augmented reality). Simply put, the users continue to play even when their smartphones are off, and all of their previous actions affect the virtual world.

The player’s task in Strategic Mode, is to use careful planning to command the base entrusted to him/her, and develop it so as not to allow other players to seize its resources. In AR-mode, Clash & GO uses geolocation, and turns the surrounding world into a real battlefield.

Strong team members will make the project a success. However, you need to diversify your team further to bring it to higher level.

Good vision and this must be a fun game. One thing that makes me feel concerned of this token is its internal use and its price. Even though it is limited but $1.8 PreICO or $3 for ICO is making investors concerned if not offering a great plan ahead and big exchanges to be listed.

This looks like a fun game from a experienced company. AR will likely be in some of the best games going forward and tokenization of the rewards and point in the game will enhance play. The strategy of burning tokens is interesting. Overall, nothing Earth shattering, but looks great.

This team is well established in the space and I have met a couple of their members from another project they are developing. It's interesting to see an established company expanding their blockchain and token sale operations & offerings on a per-game basis. I think this is quite a smart way to grow a business.

This particular game seems quite generic and while the strategy is sound, the vision could be expanded to more exciting offerings that will capture the imagination of the gaming community. The tokenomics might present a slight challenge in the secondary market - on exchanges.

Having an MVP, and a well-established dev team working on the product makes it worthwhile to look at.

DISCLAIMER: This is not investment advice.

Clash&GO has a big and good team, with very good advisors as well.

They have an already established company which is already a plus.

They have an MVP here: https://ico.clashgo.com/mvp
and they promise that in the conferences they are you can give it a try.

I like the low soft & hard cap, means that they do not try to raise a lot of money for no reason, but psychologically speaking, I would prefer the price lower than 3$.

DISCLAIMER: This is not an investment advice.

Team, product and strategy are sound. Experienced teams always help in the industry as well as well rounded group of advisors.

Success would rely on the adoption of the game and a large userbase. Comforting knowing the team is experienced, but would be better if I knew more about the other games and the publisher behind the game. Publishers ICO may make more sense as many games can be onbaorded and the cross-implementation of virtual in-game items. Limiting blockchain project to one game may have long term issues.

Although you may argue that the use of blockchain technology is not of interest in games I beg to differ. The opportunity to develop in-game rewards and incentives as well as the possibility to build an eco-system between games and platforms is reason enough. Utilizing blockchain technology to do this is no different from handling any other transaction, outside of gaming. Most tend to agree nowadays that transactions will, in the future, be on blockchains. So, why not gaming?

Clash & GO combines several features that I (and many with me) appreciate in a mobile-game. Adding on the city-building features of popular, classic, mobile games like Clash of Clans and Farmville with AR-features to provide a Pokémon style experience, Clash & GO could very well become the next big thing in mobile gaming.

The team is no doubt experienced; many team-members have previously been involved in well-known gaming projects. It’s hard to say exactly what they have achieved withing blockchain, but given the limited use of DLT in the game (initially) I’m not too worried about that.

The price of the token is too high. It’s likely that private pre-sales have been negotiated at considerably lower prices and that will hurt the token when it hits the market. Short- to mid-term it’s hard to see how an investor in the public ICO willl be able to trade their coins at or above ICO-price.

The game looks great, vision is not bad, and I have no doubt that the team will deliver. But, the token price has to be adjusted to reality and put in line with today's market and expectations.

One of the better teams I've seen in the space, in terms of related skillset and experience to what they're building. Plenty of AR and gaming experience around.

There's nothing too exciting around the vision, seems a fairly run of the mill mobile game with some ok tokenomics to it. But overall, not bad.

Creation of the AR platform.