Chimpion’s is launching e-commerce storefronts that allow merchants to accept cryptocurrency payments, choosing their favorite altcoin as the base currency denomination and allowing the merchant to settle their crypto into fiat through a stablecoin. 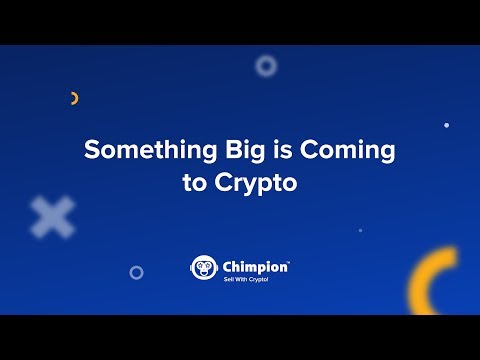 Chimpion is derived from the word “champion”, to signify both the coin’s superiority over incumbent cryptocurrencies and the organization’s core mission of championing the adoption of crypto for e-commerce. The word “champion” has a similar pronunciation in many widely-spoken languages, making Chimpion a highly relevant name to numerous cultures. Monkeys have historically played an important role in both Chinese and Indian culture.

The chimpanzee was chosen as a mascot to represent Chimpion because of the species’ association with exploration, being one of the first animals to travel into space. Likewise, Chimpion is pioneering a new era of transacting by driving the adoption of cryptocurrency for e-commerce.

Chimps are also known to be highly intelligent compared to other animals, even surpassing human memory of numerals in some cases, which symbolizes the benefits of a blockchain-enabled economy. Highly community-focused and even capable of empathy, altruism and self-awareness, the chimpanzee is a fitting symbol for Chimpion, which aims to drastically improve the way humans exchange value.

Chimpion Use Cases
Chimpion was developed with the central objective of making it useful in the real world. Below are just a few of the potential applications for CHIMP:

International E-Commerce in Emerging Economies Cryptocurrency use has surged in emerging markets like Venezuela and Nigeria, where fiat currency can be volatile and many people do not have access to traditional bank accounts. Due to high transaction fees, lack of security, and complicated processes, it can be difficult for merchants in these nations to sell online, which limits their revenue opportunities.

With Chimpion, merchants anywhere in the world can set up an crypto e-commerce store with ease and start selling with very little initial investment required. CHIMP is a fast, accessible, secure coin that will make transactions more efficient.

Avoiding Chargeback Fraud
Sometimes merchants are apprehensive when there is something strange about a purchaser. For example, if an order is placed under the name “Elvis Presley”, the merchant may be concerned that the payment will bounce as a chargeback after the item is shipped. It can be particularly difficult for this Elvis Presley to convince merchants he is a legitimate person who shares a name with a well-known celebrity.

With Chimpion, cryptocurrency payments are processed immediately, allowing the merchant to mail the product to Mr. Presley without worrying about a chargeback.

Brick-and-Mortar to Online
There is no doubt that selling online will boost retailers’ revenues, yet many brick-and-mortar stores are still not selling online. In many cases, this is because the process is complicated and expensive and a different marketing strategy is required to drive traffic to an online store.

Selling with Chimpion makes it easy for traditional retailers to sell their products online. After staking their desired amount of CHIMP, merchants can start selling immediately to customers around the world. With Chimpion’s Paytomat integration, merchants can also accept cryptocurrency payments in-store, often with their existing hardware.

Wholesale
Some wholesale vendors prefer to sell with crypto, saving significant costs by avoiding expensive transaction fees, making international transactions simpler, and expediting order processing time. Chimpion vendors can choose whether to receive payment in CHIMP or have it automatically converted to the stablecoin of their choice.

It's funny because they ask for kyc to their investors, but they not pass the kyc or verify the team accounts.
When they do it, I'll edit my review.

Enter Asian e-commerce market, which are untapped by industry Leaders (Shopify,BigCommerce, Woocommerce);Launch 25+ new stores
Roll out cryptocurrency-denominated stores for the major cryptocurrencies and release 25 additional websites focusing on these cryptocurrencies .

The world is changing fast, don’t get left behind. Join the YOUniverse where 200 mill...