The AXEL.Network isn’t coming, it’s here. It’s live. A fully operational Masternode network bringing the future of the distributed web. We’ve built our Content Distribution Network (CDN) from the ground up using distributed technologies to foster a movement from centralized systems to a decentralized world. It’s a network that will change how the internet handles data. 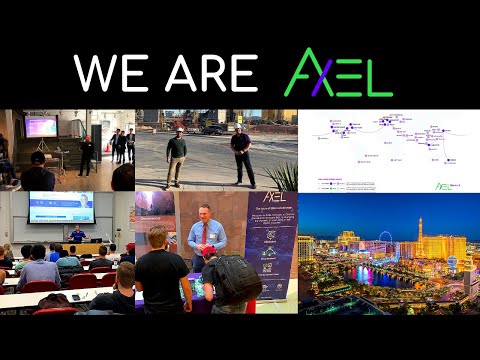 Data is the new gold. It’s the new oil. It’s the new currency. In the digital economy, data has become one of the greatest drivers of value. The largest companies in the world are powered by data - Apple, Google, Facebook, Amazon, Alibaba, Tencent...the list continues.

But the creators of data have seen their control over their own identities eroded. Sometimes openly, often covertly. Even big companies have been left vulnerable to a lack of transparency on how data is managed by other companies.

Choice and control are compromised for convenience. And many individuals and companies are left to believe that you can only have one or the other.

AXEL has different ideas. We believe control should always remain with the data creator and we’re creating the tools to enable everyone to participate in the digital economy. We call it “data custody”. In fact, we’re redefining how data is handled.

Axel is backed by a team of experts, who seem capable to bring this project to its full potential. It has an already working MVP from quite an early stage and an extremely realistic soft cap and hard cap. Having realistic expectations is, for me, a good sign that the team is planning to actually implement this project and develop it over the years, and they are not doing this just for profit like other projects. Their idea is good and the fact that this project is launching from USA in the current crypto context makes me believe it might have a further advantage in the long term.

Data is indeed the new gold and decentralised data storage and distribution is no doubt going to be a bid deal over the coming years. Axel has a really large real with excellent combined experience, also it would be nice to see a few good advisors on their team as well.

I particularly like the term "Data Custody" which is the name they have given owning our own data. This is essentially what it all boils down too. I mean we create the data, with our time and energy, we should own the data as well.

All in all I like the concept, the whitepaper and website are well written and provides all the relevant information.

Their softcap and hardcap goals are very reasonable as well.

A project started from the USA, interesting and not so often.

The AXEL Network, as they call it, comes with an MVP. The idea is not quite original, as I have seen other projects having a similar idea, however, their team is different, therefore, so is their approach. Speaking of the team, they look well prepared to deliver a good working product to the market in the near future. And they have the numbers, too.

AXEL Network is planning to do a different kind of Masternode and I am rather curious how are they planning to succeed on such a competitive market. However, after seeing they have not started their ICO yet and they have managed to provide us with a working MVP is rather impressive. Their team has the numbers and is looking prepared for the task they have taken and their Soft Cap is extremely realistic. From what I've seen, this project disarms many of my worries that I usually look for.

- Team : A serious team with a lot of devs, which is really reassuring for a project involving masternodes. The team members are linked to the project on social media.

This is definitely worth a 4/5 for the team.

- Vision : Mixing data and blockchain is definitely a revolutionary vision. Blockchain can help secure and store data, which the current network can't do.

For these reasons, I give a 4/5 for the vision.

- Product : The softcap is low, the community is big and the whitepaper clear and well written. This is exactly what we expect from an ICO. Let's hope they will stick to the roadmap.

Therefore, I give a 4/5 for the product.